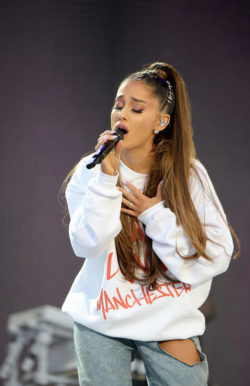 The We Love Manchester Emergency Fund charity has announced that Ariana Grande will serve as the charity’s first patron.

The charity was set up by Manchester City Council and partners to urgently distribute funds to support people who were injured or bereaved in the attack.

On 22 May, 22 people died in the terror attack at Ariana Grande’s concert at the Manchester Arena. Manchester, the country and the world joined a fundraising effort that has seen a massive community mobilisation as well as an extraordinary benefit concert, just a week after the tragedy that combined to raise over £11.7m.

Under plans put forward by Manchester City Council Ariana Grande is already to get honorary citizenship of Manchester in recognition of her extraordinary connection with the city.

Now the charity that is allocating funds to the victims, the We Love Manchester Emergency Fund, has asked Ariana to act as Patron. The role of the Patron is to act as a figurehead, promoting the charities objectives, to increase awareness of the charity’s mission and to speak on behalf of the charity. There is a strong spirit of partnership between the charity and its Patron.

Councillor Sue Murphy, chair of the board of trustees of the We Love Manchester Emergency Fund, said: “Ariana Grande exemplified Mancunian spirit at a time when she was struggling with the aftermath of the attack herself. Her fundraising concert raised millions for the appeal and buoyed all our spirits. We are grateful to her for agreeing to be patron of this charity, which seeks to help everyone who was affected by the tragedy.”

Mike Adamson, chief executive of the British Red Cross, said: “Ariana’s experienced the tragedy that happened in Manchester and now she is also central to the extraordinary community effort that came together afterwards. We are proud to work with both Ariana and Manchester City Council and to help in any way we can.”

Trustees from the newly created We Love Manchester Emergency Fund charity have released a further £3m from the We Love Manchester Emergency Fund. Early payments totalling £1m were released at the beginning of June. The next round of initial gifts will see bereaved families and those who were in hospital for more than seven days receive a payment of £50,000.

The early funds will be released as gift payments, meaning that there will be no conditions on how the recipients spend the money to support them and their loved ones through the immediate aftermath of the atrocity.

Trustees are also looking into ways to ensure that the remainder of the money goes to those who need it and will continue to meet fortnightly to monitor progress.